A Time to Remember

Today I remember Conor, I especially recall his cheeky grin that would grow into the warmest of smiles, I remember how he would light up when his daughter was around and how he would sing a chirpy song to lift the spirits of those around him. Conor was the first person I worked with that died from an overdose, taken way to soon, a young man that found himself caught between mental health, addiction and homeless services, died by overdoes while suffering the side effects of stigma, ignorance and inaction, unfortunately the effects of which are still present today nearly two decades later.  #IOAD2021 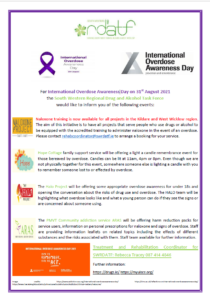